Time and Weather in Dubai, UAE

Dubai, the United Arab Emirates (UAE) is located in the GST (Gulf Standard Time) time zone, UTC/GMT +4 hours. The sunrise is at 06:03 and the sunset at 18:25 for the moment of the beginning of September 2018. The length of the day is 12 hours 21 minutes. The time in Dubai is 3 hours ahead of Greenwich, London.

Dubai is located in the area of tropical desert climate with hot, humid summers and warm, short winters. The overall warm climate in Dubai is derived from the position near the line of the Tropic of Cancer. 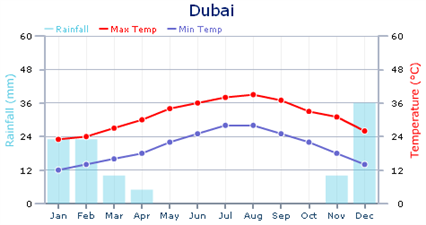 Summers in Dubai are extremely hot, dry, and humid. The temperature reaches 45 °C (113 °F) quite often. The humidity level may go up to 90%.

The rainfall is not that often in Dubai; it rains mostly during the period between December and March in the form of occasional thunderstorms. 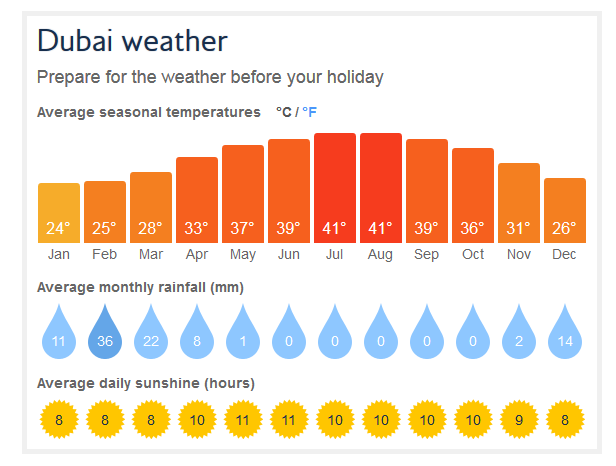 During the summer season, Dubai gets ‘attacked' by Shamal winds, strong north-westerly winds coming from Saudi Arabia. Those winds are getting dirty and dusty and may last for several days. Recently, in April 2015, the sandstorm hit Dubai and reduced the visibility to 500 meters. Earlier, on April 2008, the sandstorm was that strong that the visibility was reduced to 1.500 meters.