Dubai is home to many unusual structures, and it has one of the most diverse architectures. 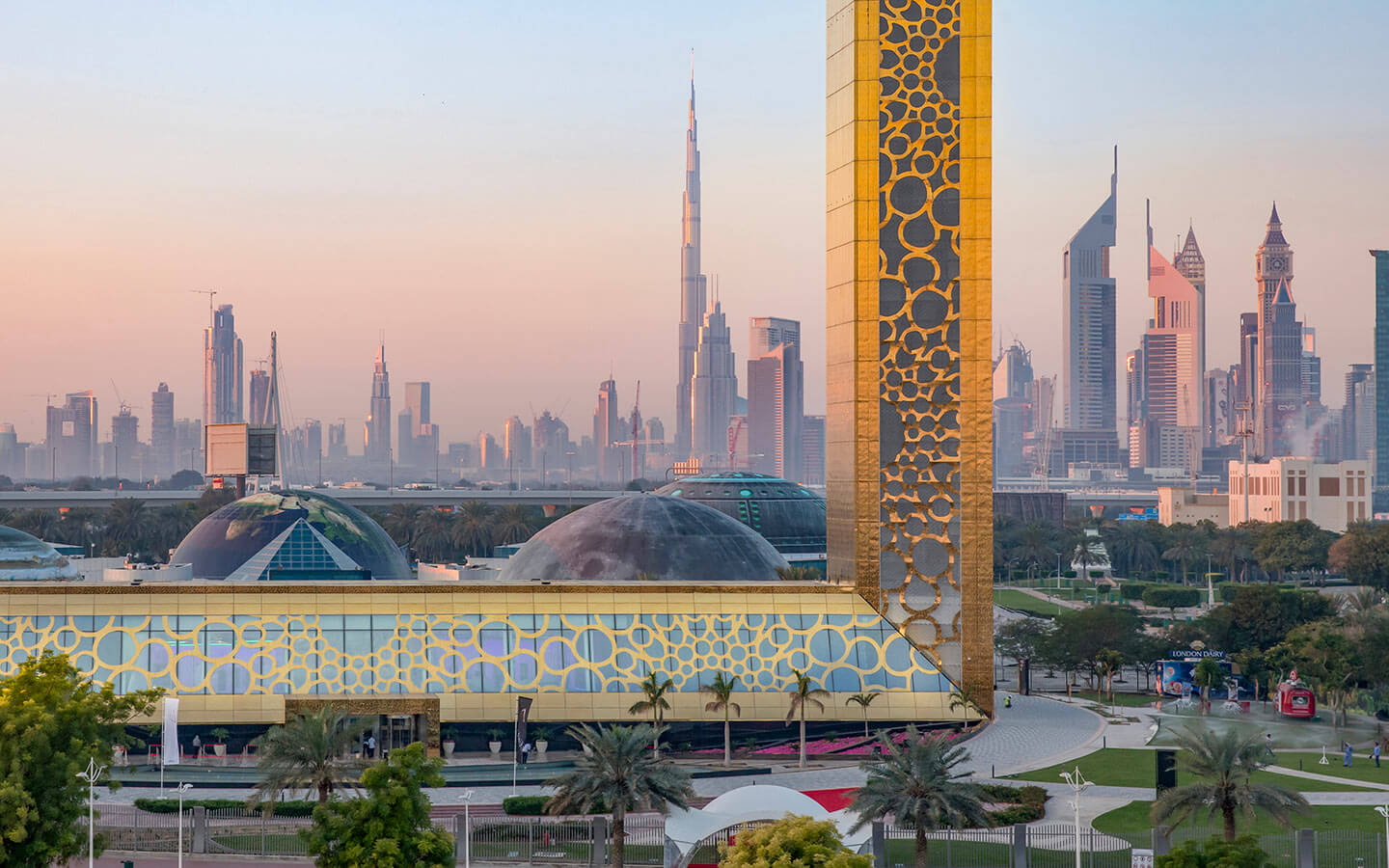 A giant empty frame located in Zabeel Park, rising 150 meters above ground, is an architectural landmark in Dubai. The author of the project is Fernand Donis that won the design competition by the Government of Dubai. There were 926 proposals at the 2009 ThyssenKrupp Elevator International Award.

The frame holds a record for being the largest in the world. The author does not retain credit for the landmark as it was alleged that he had his intellectual property stolen.

The giant frame is made of glass, steel, aluminum, and reinforced concrete. The Dubai’s views and skyline can be seen through the structure as if it was a picture placed in there.

In an ongoing lawsuit, the architect Fernando Donis accuses the Municipality of Dubai for not giving him a compensation or contract for his design. The Architect and the Government of Dubai are engaged in a legal dispute over the ownership of the copyright of the monument. Fernando Donis claims that the government stole his design and built the frame without him.

The ground floor of the memorial features a museum showcasing Dubai’s history. At the top of the building, there is a 93-meter long viewing gallery, where viewers can walk along glass-floored walkways. There is also an interactive exhibition on the future of Dubai, with Augmented Reality. 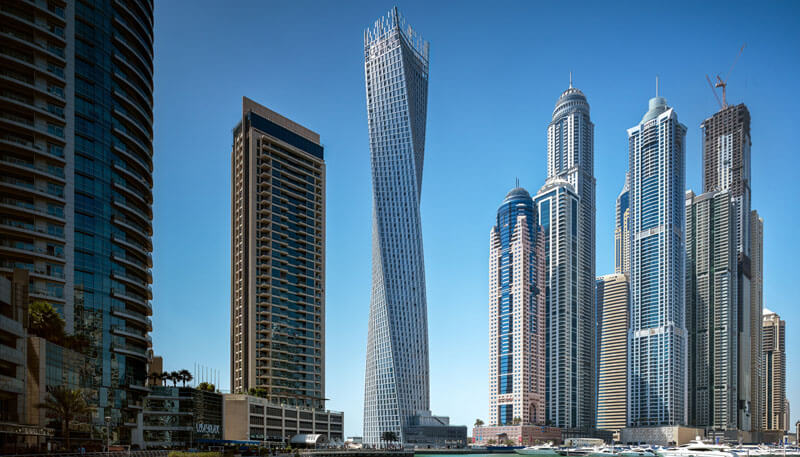 Known as Infinity Tower before its opening, the Cayan Tower is a 306-meter-tall (1004 feet), 75-story skyscraper. The tower is designed by the same architectural group who did the design for the Burj Khalifa and Trump Tower in Chicago. The building became the world's tallest high-rise building with a twist of 90 degrees. The Shanghai Tower surpassed the record in 2015. The Cayan Tower features 495 luxury apartments.

Cayan Tower's twisting design was achieved by a rotation of each floor with 1,2 degrees around a cylindrical elevator. The Tower is also an iconic element of the Dubai Marina Skyline and is one of the must-see buildings in Dubai. 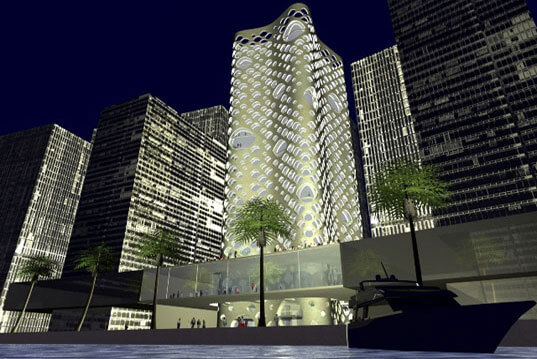 102-meter tall skyscraper in Dubai named as O-14 is notable architectural building in Dubai. The structure has 23 floors and a floor area of 300,000 square feet (28,000 square meters). The façade of the building is made of extremely fluid concrete and is 40 cm thick. The façade has 1000 circular openings of different sizes. The space inside is entirely column-free as the building is held up by the core and exoskeleton. The skyscraper is the winner of the Silver Emporis Skyscraper Award in 2009 and won the ACEC National Honor Award for Excellence in Engineering Design in 2010. The Council on Tall Buildings and Urban Habitat also awarded O-14 for the best tall building in the Middle East and Africa in the best tall buildings awards.

One of the notable architectural building in Dubai is the Dubai Opera, designed to resemble a dhow, traditional Arabic sailing vessel. The ‘bow' of the building is a house of the main stage, orchestra, and seating, and the elongated ‘huff' features waiting areas, taxi drop-offs and a parking area.

The Dubai Opera, multi-purpose performing arts theatre, is one of the elements of the Opera District launched in 2013 by Emaar Properties. The district consists of art galleries, museums, design studios, and different cultural venues. The Dubai Opera has 1901 seats. Janus Rostock who works as a design director for Atkins and is one of the most potent architects in the Middle East.

Lots of moving floors, ceilings and walls allow the auditorium seating to change the configuration, or even to disappear completely. The stage can also change arrangements.

The Sheid Saeed Al-Maktoum’s House is situated in the historic district of Al Shiganda close to the end of Dubai Creek. It is one of the oldest buildings in Dubai. The house belonged to the ruler of Dubai in the 20th century – Sheid Saeed Al-Maktoum. He was a grandfather of the current ruler. The house was built in 1896. The building is a window to the past of the city. The views of the skyline mixed with the historical House brings a feeling of traveling through time due to its contrast between architectural styles.

The building has been transformed into a museum and features images and artifacts of the old Dubai. 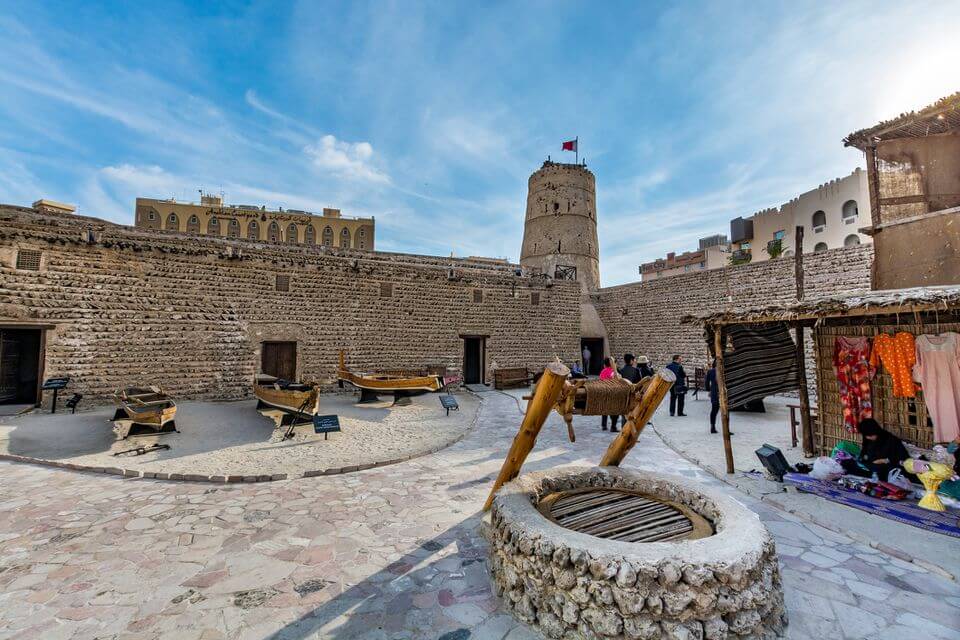 Dubai Museum is in the Al Fahidi Fort – the oldest existing building in Dubai, built in 1787.

The building is shaped like a square, and towers occupy three of the corners. The Fort is built of coral rock and mortar. Off the southern wall, there is a reconstruction of the old city walls with a traditional tall dhow next to it in the center of a vast courtyard. There are two cannons at the main gate. Fort walls are lined with three internal halls. One of the halls located at the main entrance serves as a ticket office of the Dubai Museum. Other halls feature collections of old weapons and arms from different periods of the history and a model of the city in 1820 AD. Halls surround the central courtyard, and there is an Arnish in the corner, which is a traditional summer house made of weaved palm fronds, featuring a distinct wind tower design.

The main entrance of the museum: 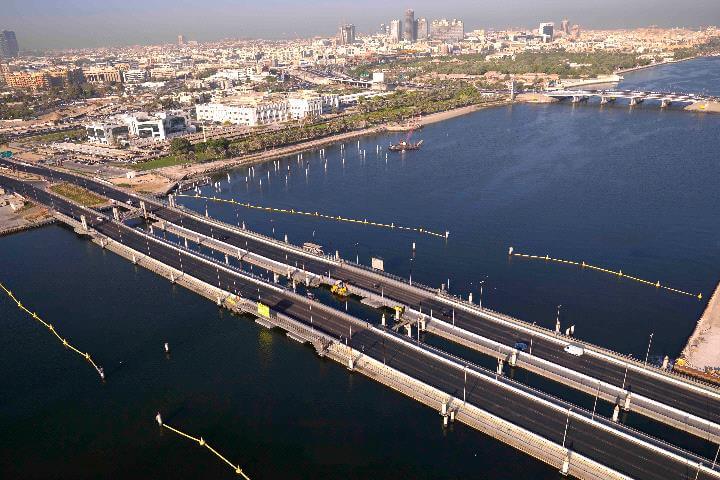 Floating Bridge opened in Dubai in 2007 is a pontoon bridge. The bridge was constructed to reduce the traffic in Al Maktoum Bridge.

The bridge has a total length of 365 meters and a width of 22 meters and has the capacity of 6,000 vehicles per hour. The bridge features three lanes and one pedestrian footwalk each.

The construction of the bridge took only 23 days. 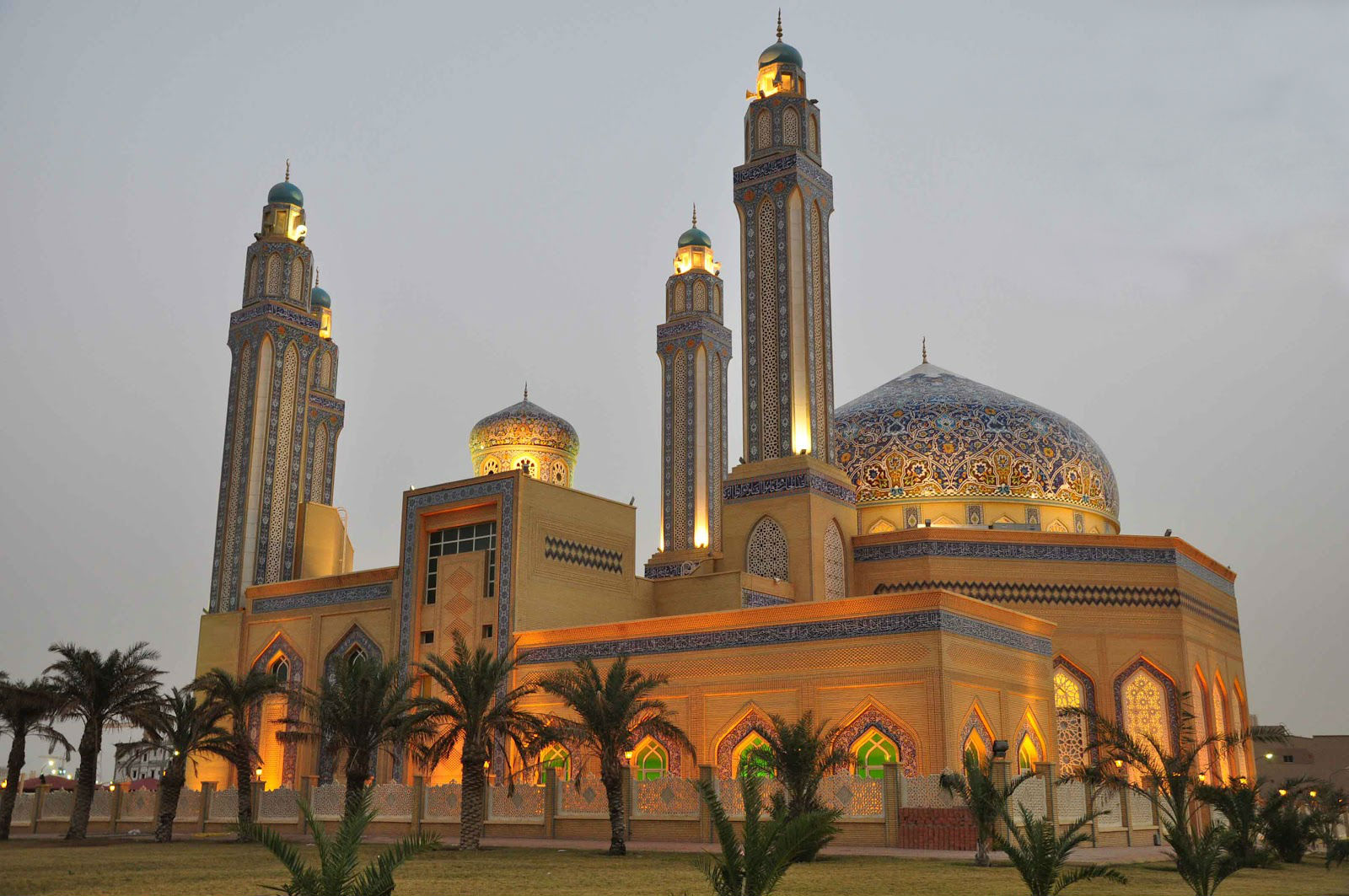 Jumeirah Mosque, situated on Jumeirah Beach Road, is named as the most photographed mosque in the city and is an iconic landmark in Dubai. Taking pictures is allowed both from the outside and the inside. The mosque can hold up to 1200 worshippers at a time. It is built of white stone and has twin minarets across the central dome. The dome is bordered by four smaller domes, each with its stone carvings. The mosque is a fantastic landmark especially when it is lit up against the sky.

There is a friendly and greeting environment at the mosque for visitors with any religious backgrounds. It is one of the biggest mosques in the United Arab Emirates with the beautiful architecture and is a must-see destination for visitors traveling to Dubai. The Jumeirah Mosque is the only mosque that welcomes non-muslim visitors. There is a 75-minute tour offered to visitors, and in case you need a traditional attire since all men and women have to wear long sleeve tops and have their knees covered, it can be borrowed from the mosque. Since it is the only mosque that welcomes people from other religions, it is absolutely worth going there to check out the architecture of the mosque and to experience it from the inside. 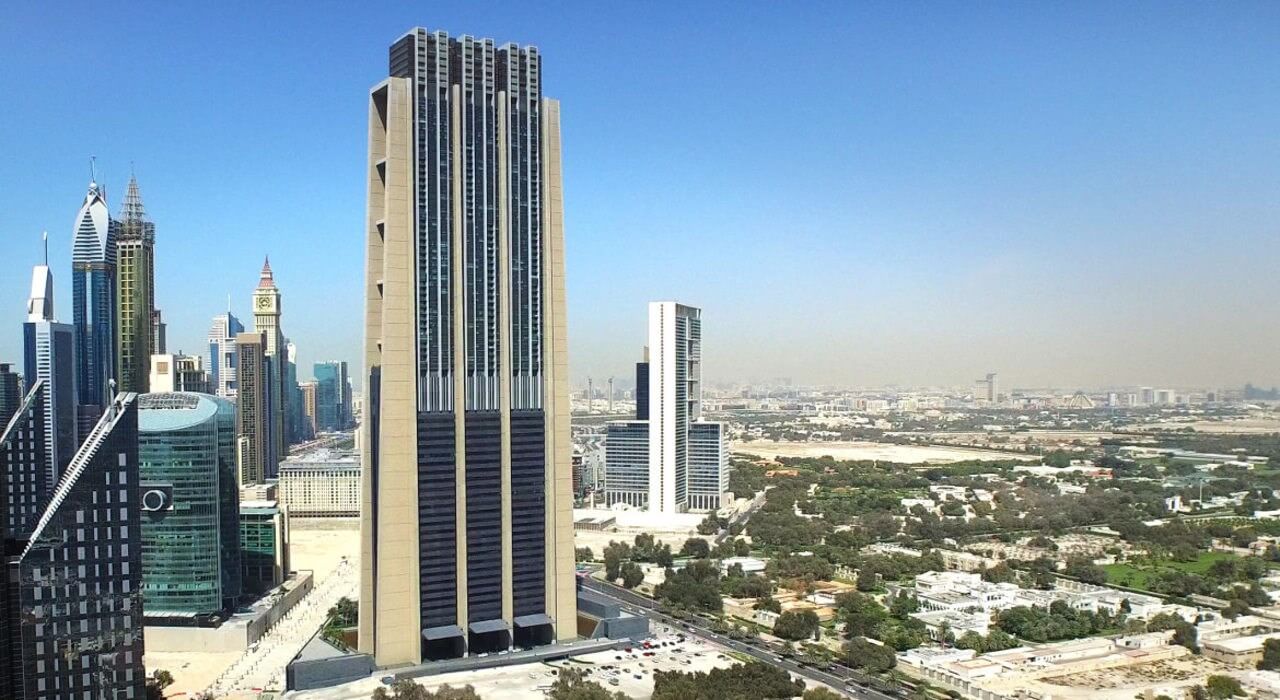 The index is another skyscraper in Dubai that is worth noting. It has 80 stores and is 328 meters tall. The environmental strategy of The Index lowers the requirement for air conditioning within the building and reduces the required energy costs for its tenants, that consist of around 6,000 residents. The base of the tower is represented with 25-store office space so that the apartments can have a better view of the city. The building is turned away from the city axis so it can reduce the solar gain. The core mass of the building absorbs most of the heat and minimizes the need for air conditioning. The entrance consists of four store atrium.

One of the notable towers with its design, The Maze Tower, is located on Sheikh Zayed Road and is only 15 minutes away from the airport. The tower is distinctive with its unique design of a maze on the façade, which forms the first vertical maze in the world and was created by a famous maze designer Adrian Fisher. The natural stones used to build the labyrinth have an organic warmth that differs it from steel and glass. It is worth noting that the maze is not just a random design to make it look like as if it was a maze, but it is a real puzzle. The look of the building changes several times a day depending on the shadows and light. The building is lit usually lit up at night in different colors whereas the central part of the lighting structure is the maze itself. Visitors typically have the building on their list as it has an astonishing look and holds a World Guinness Record for the largest vertical maze in the world.