British Travel Company has recently revealed that Dubai has the tallest skyline in the world after Shanghai, China. It is evident that there is no other city in the world that has skyline as Dubai does and only because it is a home to the world's tallest building – Burj Khalifa; however, Burj Khalifa is not the only building that contributed in greatness of the skyline, there is also the tallest residential building – Princess Tower. Dubai has many high-rises out of which 88 are taller than 180 meters (591 feet). Dubai’s skyline features 18 completed and topped-out buildings that are minimum of 300 meters (984 feet) in height.

The history of skyscrapers started in 1979 with the construction of Dubai World Center that was the first high-rise in Dubai. By the time of its completion, the Dubai World Center was the tallest building in the Middle East. Soon, the skyscraper building boom started in Dubai, especially between 1999 and 2005. In less than ten years, Dubai managed to own one of the largest skylines in the world. Dubai is now a place that has not only the tallest building of the world or the tallest residential skyscraper but the tallest hotel in the world as well. In the year of 2012, there were 363 ongoing skyscraper constructions, with 640 current high-rise development proposals.

As previously mentioned, Burj Khalifa is the tallest human-made building in the world and is an inevitable part of the skyline of Dubai. It is almost twice as tall as the Empire State Building in New York and has the highest number of stories in the world. The amount of the concrete that went on a construction weights same as 100,000 elephants.

The decision to build Burj Khalifa by the government was based on the desire to diversify the economy of Dubai from an oil-based to the one that would be service and tourism-based. The government also thought that construction such buildings would help to gain international recognition. The construction began in 2004, and at the peak of it, 12,000 people were working on it per day.

The tower had a name of Burj Dubai until the opening date when it got its name to honor the ruler Abu Dhabi, Khalifa bin Zayed Al Nahyan.

The design of the building was created by Skidmore, Owings, and Merrill (SOM) who also designed Willis Tower in Chicago and the One World Trade Center located in New York. The design is influenced by Islamic Architecture and features a triple-lobed footprint inspired by the flower of hymenocallis. There are three elements arranged around the central core or hexagonal hub. The center itself culminates in a sculpted spire.

Burj Khalifa features world’s third fastest elevators according to Emporis. In total it has 57 lifts and eight escalators. The maximum speed of elevators is 36km/h or 600m/min and is the single longest running elevator. The time to reach the observation deck on the 124th floor from the ground floor is only about one minute.

Burj Khalifa is a multi-use building with restaurants, hotels, apartments, office space and observation decks. The exterior of the building is composed of reflecting glazing with aluminum and stainless steel. Exterior cladding features 26,000 glass panels each hand-cut, but specialists from China specially brought for that work. The cladding system was made to withstand the heat in the summer in Dubai which tends to be extreme.

The Skyscraper has the spiraling “Y” shaped plan. This design helps to reduce the force of the wind on the tower. There are 18 permanently installed tracks to provide access to building's façade for maintenance and cleaning.

The tip of the building can be seen from about 95 kilometers away. Soon it is planned that Burj Khalifa will no longer be the tallest building in the world as the construction of Jeddah Tower is going on the north side of Jeddah in Saudi Arabia. The building is going to be the world’s first 1 kilometer (3,281 feet) high building 181 meter (591 feet) taller than Burj Khalifa in Dubai’s Skyline. 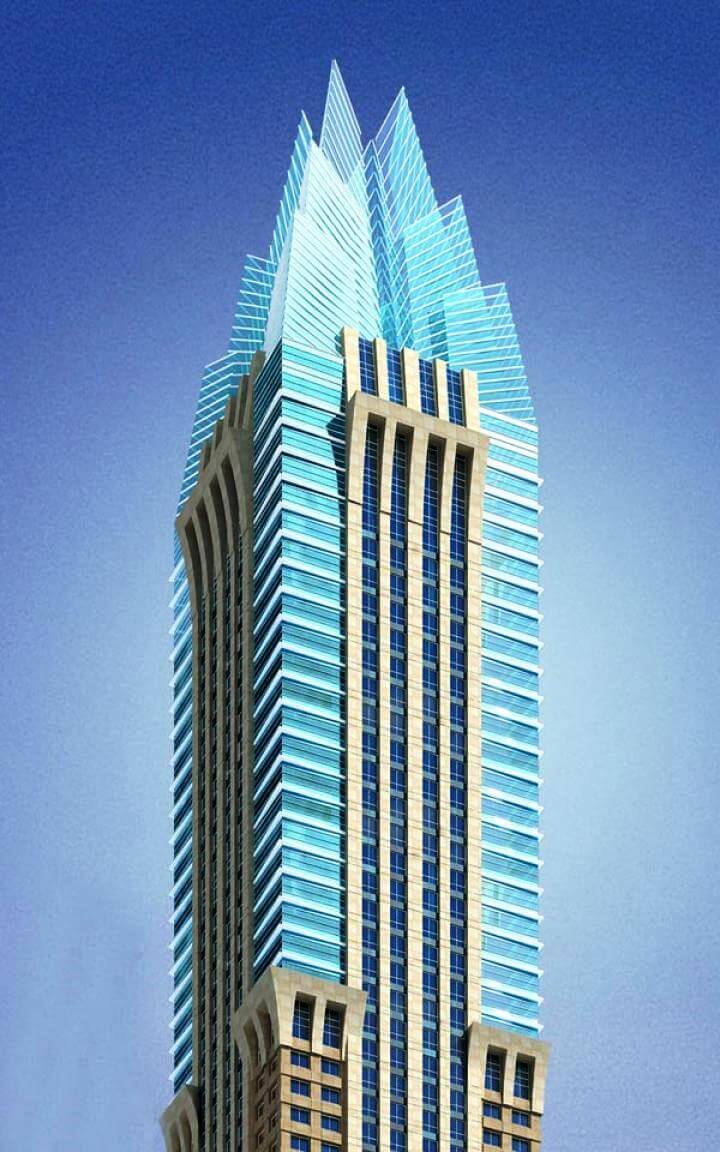 Located in the Marina district in Dubai, Marina 101 is the 101-store skyscraper. The building was opened in 2016 and ranks second in the list of the tallest buildings in Dubai. The height of the construction is 425 meters (1394 feet). It is also the second tallest residential building after 432 Park Avenue. National Engineering Bureau created the design of the building and the TAV Construction – Turkish conglomerate, built it.

The first 33 levels of the Marina 101 is the 5-star hotel Hard Rock Hotel with 281 rooms and the rest of the stories consist of residential apartments. 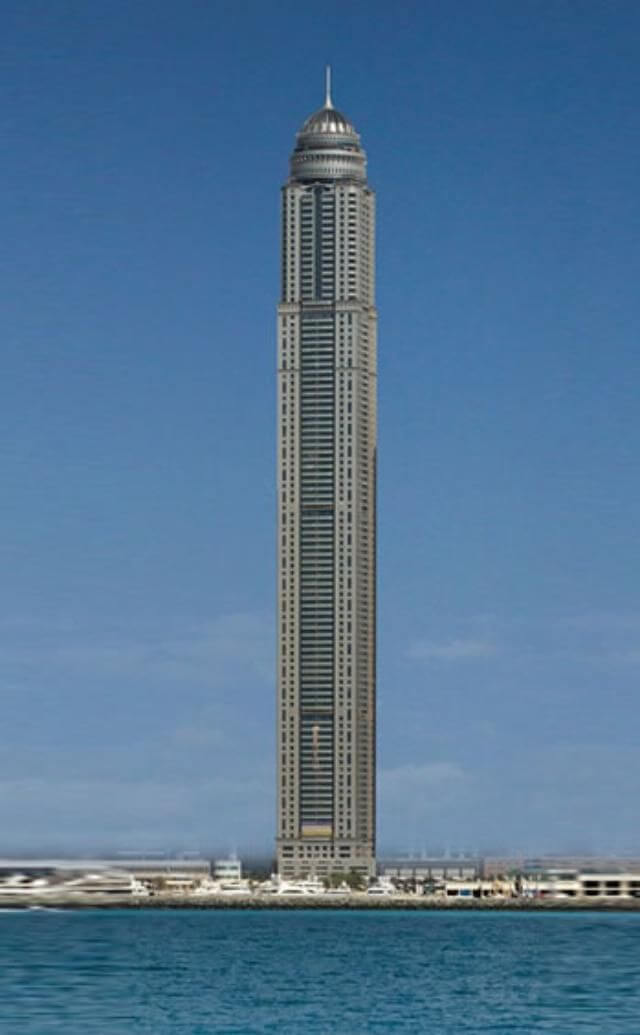 The princess tower is a residential skyscraper situated on Al Sufouh Road in the Marina District, a waterfront district in Dubai and is the third tallest building in the city and the third tallest residential building on earth after 432 Park Avenue and Marina 101. The construction, which was proposed in 2005, started in 2006 and was completed after six years, in 2012. The building features 763 residential units, eight retail outlets, and 957 underground parking bays. Including basement and the ground floor, the building has 107 stories out of which 100 floors are above the ground. The architectural height of the skyscraper is 414 meters (1358 feet). The highest occupied level of the building is the 97th floor from where residents can enjoy mesmerizing views of Dubai. The building features indoor swimming pools, gyms, billiards, and tennis tables, an outside swimming pool on the roof of the building's podium and even a mosque exclusively for its residents. 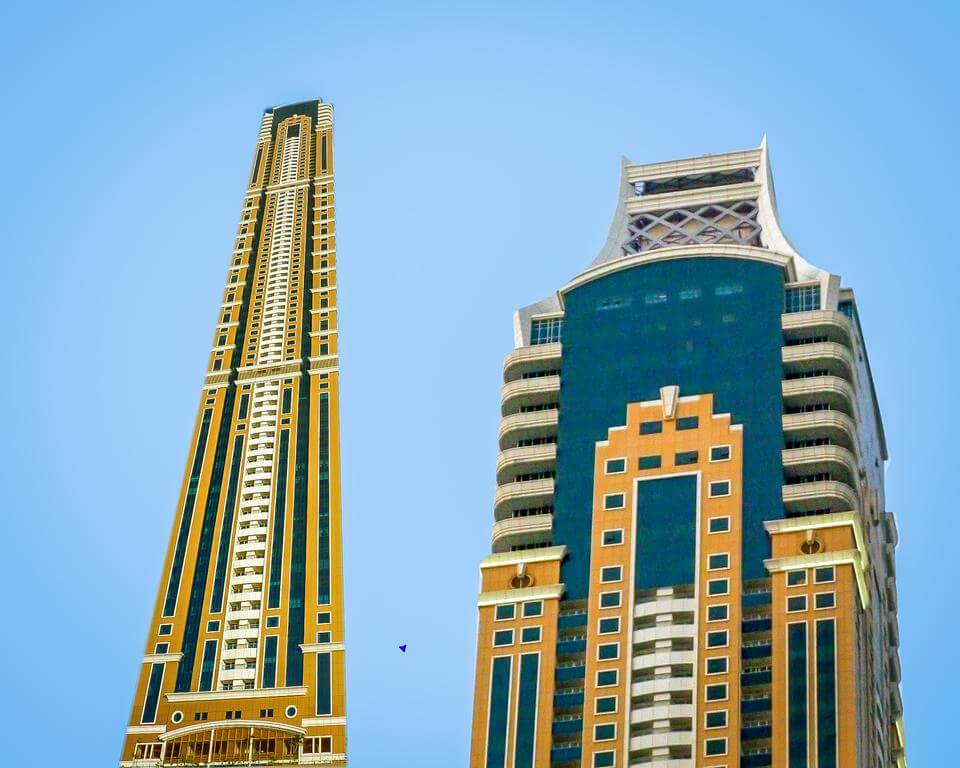 Overlooking the Palm Jumeirah, the Elute Residence in Dubai is one of the tallest skyscrapers in the skyline. With its 87 floors, the building is 380,5 meters (1248 feet) high. The tower features 685 apartments,12 elevators, parking spaces and other amenities such as swimming pools, spas, fitness centers, business centers, and reception areas. The Elite residence ranks 5th in the list of the tallest building in Dubai. The construction of the building began in 2006 and was finished in 2012. 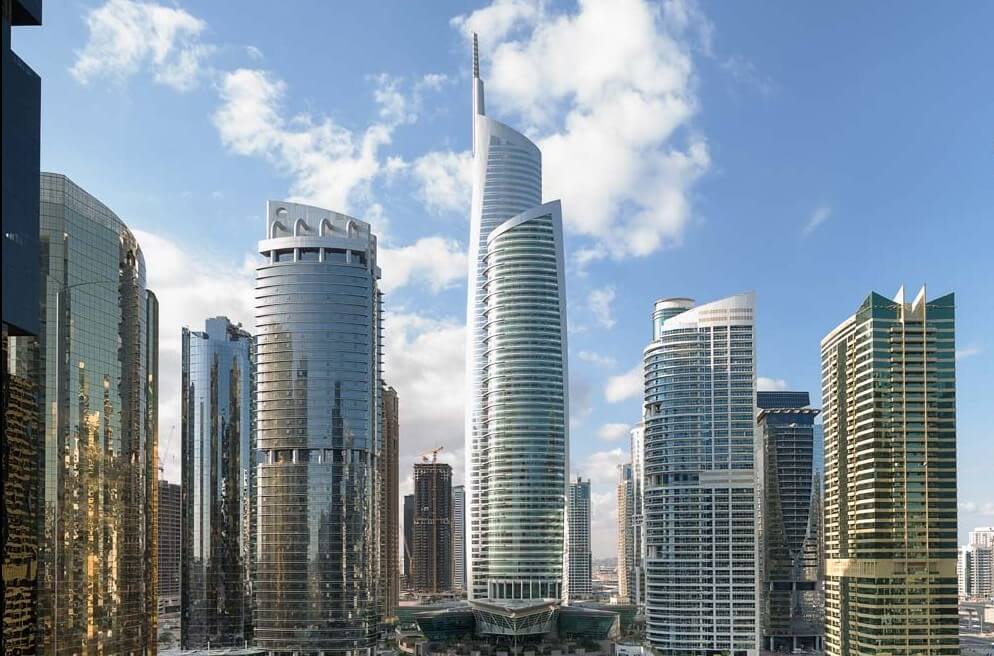 Regarding the skyline of Dubai, it is impossible not to mention the Almas Tower, the tallest office building in the city that also used to be the tallest building in Dubai before Burj Khalifa was built. The tower is situated in the center of Jumeirah Lakes Towers Free Zone and is the tallest building on the development. The building is a multi-tower office designed to house the Dubai Diamond Exchange, and the design took inspiration from the unique shape of diamonds. The facets of a diamond also inspire the two-story podium of the skyscraper with eight triangles. The model appears as two diagonally offset ellipses, and the southern component has 12 more stores than the northern segment that make the design asymmetrical and unique. The central structural element of the building, the southern parts, has an 81-meter spire attached to it that further distinguishes it from the northern component. To maximize the cooler northern sunlight, the components of the north of Almas Tower has semi-transparent glass, and in order to protect against the heat gain, the southern elements have a high-performance finish.

The building has waterfront outdoor cafes and restaurants, along with community retail stores. There are squares and gardens between the large districts of community. 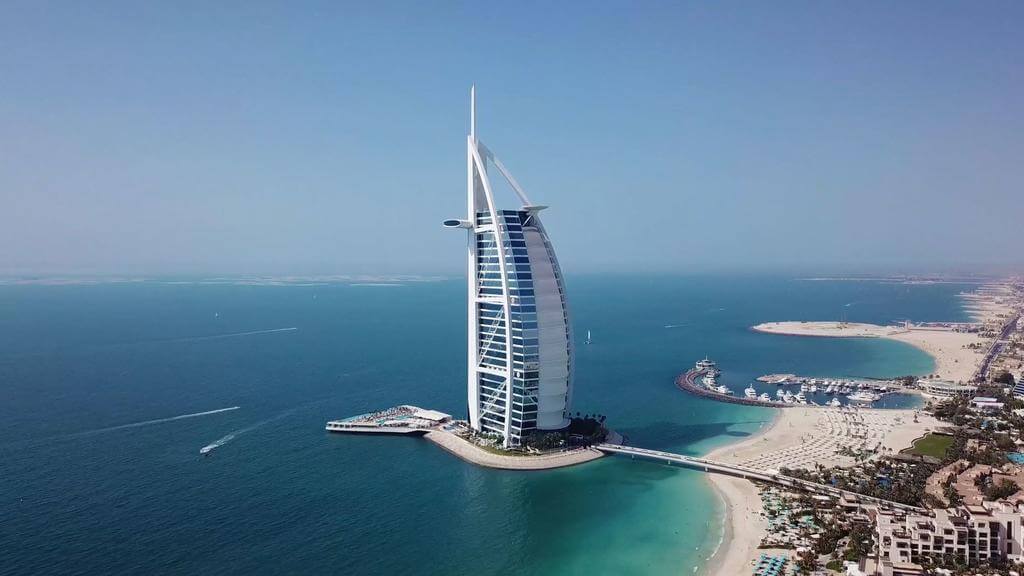 A luxury hotel in Dubai, Burj Al Arab, is the fifth tallest hotel in the world, in spite of the fact, that 39 percent of its total height consists of a non-occupiable space. The hotel is placed on an artificial island of a reclaimed land 280 meters away from the Jumeirah Beach. The shape of the structure resembles a sail of the ship, the billowing spinnaker sail of a J-class yacht. Construction of an island began in 1994 involving 3000 companies and contractors. Reclaiming the island took two years and further three years to build the building. South African construction contractor Murray & Roberts and Al Habtoor Engineering built the hotel. It took 70,000 cubic meters of concrete and over 9,000 tonnes of steel to make the construction. The architect of the hotel is Tom Wright. Burj Al Arab opened in 1999 and is managed by Jumeirah Group. The hotel accommodates 202 bedroom suites. It is a five-star hotel and is sometimes described as a seven-star hotel, although there is no such official ranking available. It is also one of the most pricey hotels in the world that you can find. Burj Al Arab has the tallest atrium of 180 meters (600 feet) high.

The architectural height of the building is 321 meters (1053 feet) with the top floor located at 197,5 meters high (648 feet) and ranks 17th on the list of the tallest buildings in Dubai. Burj Al Arab is the tallest hotel on a human-made island. There are 56 floors at the hotel, three below ground.