An artificial island chain – Palm Jumeirah, world’s largest human-made island, is located in the United Arab Emirates, on the shoreline of Dubai and was created using landfill by Nakheel, a property developer in Dubai currently owned by the government of Dubai.

The author of the masterplan is an American firm – Helman Hurley Charvat Peacock (HHCP), famous for its work with Sea World, Disney, and Universal Studios. The island is renowned for its shape. If viewed from above, the island has a configuration of a palm tree, symbolizing More than 100 studies took place to plan the Palm. Dubai’s heritage, and was built from the reclaimed land mass. The shape allows creating the longest stretch of new beachfront. The foundations of the palm were constructed with millions of tons of rock taken from the Hajar Mountains. The island added 78,6 km to Dubai’s 72 km coastline and is a unique chain of various islands joined together. The island is visible to the naked eye from the space. Twelve thousand trees grew in a nursery to supply the island with palm trees.

Construction of the island chain started in June 2001 with a budget of $12 billion, and its developers announced 2006 as a year of completion of first residential units. During its construction, in 2007 the Palm Jumeirah Island had already become the world’s largest artificial island. The same year, 500 families resided on the island, and 75% of the properties on the island were ready to turn in. By the end of 2009, the island already had 28 hotels. At 40,000 employees were working on the project on the peak of the construction.

The construction had several delays, and the date of completion was pushed by developers multiple times resulting in almost two years of delay.

According to the article published in New York Times, NASA’s laser altimeter satellites discovered the island as sinking measured 5 mm (0,20 in) per year. Nakheel responded that there were no problems at the island and pointed out the measurement resolution of NASA’s satellites that were of only 50 mm.

Nakheel miscalculated the actual cost of building the island, and the situation required the raising of additional capital. Because of that, the original number of properties got increased by developers and resulted in reducing the space between properties on Palm Jumeirah. The New York Times published an article in 2009 saying that the people, expecting bigger space between buildings, were raging about the issue. Nowadays, the palm has about 1,500 beachfront mansions and 6,000 apartments.

By preventing the natural movement of water, the seawater within Palm Jumeirah became stagnant, but the problem was resolved by adding another gap in the barrier.

The palm has tunnels, roads, and public transport, so all the resorts and hotels can be easily accessed. Many private touring companies offer sailing around with a yacht or a speedboat.

Current US president, Donald Trump was planning on building a hotel on the island which would have 60 stores, but the idea was never achieved because of the global financial crisis in 2009.

Palm Jumeirah was not the only artificial island planned to be built in the United Arab Emirates. Palm Jebel Ali was going to be a bigger island. The construction started in 2002 but because of the financial crisis in 2008 and falling real estate values in Dubai, the developers stopped it, and no further work is planned anytime soon. Palm Deira, an island eight times larger than Palm Jumeirah, was launched in 2004, but instead, Nakheel opted for the four-island project – Deira Islands.

Environmentalists have criticized the project because of the massive undertakings and transformation of sea and landscape required to build the island. It radically changed the wave temperature and erosion patterns in the Persian Gulf. Increasing of temperature is considered ad one of the main reasons in reef habitat degradation. 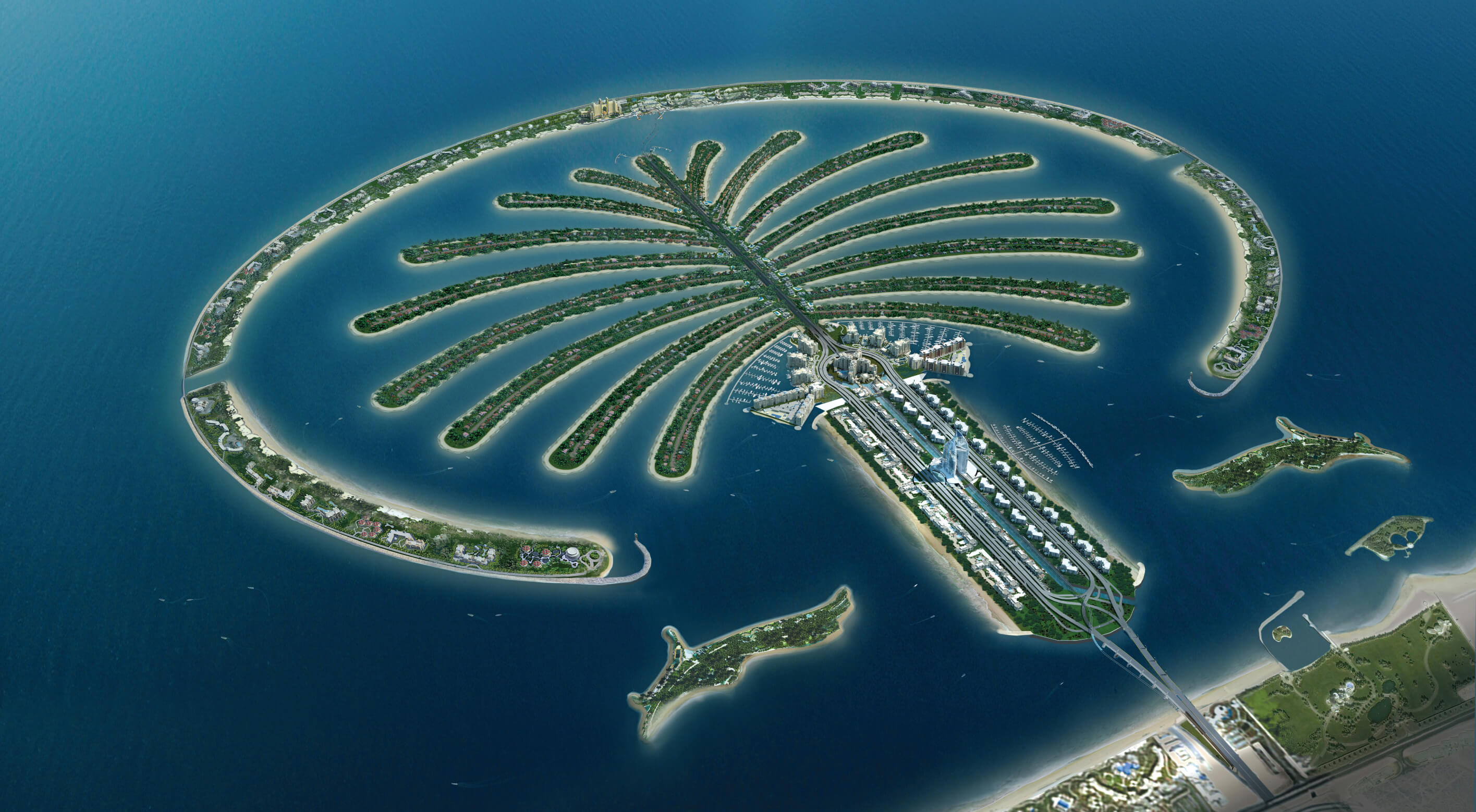 Monorail in Palm Jumeirah, created by Hitachi Ltd, connects the Atlantis Hotel to the Gateway Towers at the foot of the island and is 5.4 kilometers long (3 mi). The first monorail in the middle east in Palm Jumeirah started operating on 30 April of 2009. It took two years to build the Monorail with a budget of $400 million with an additional budget of $190 million for its further extension. Currently, there are three stations: Gateway Station, Ittihad Park Station, and Atlantis Aquaventure Station. Nakheel Mall Station and The Pointee Station are planned to be built.

The Palm Monorail is fully automatic, and the trains do not have drivers; however, attendants are available for any emergency. The Monorail uses Hitachi Monorail straddle-type technology. No direct connection is available from the Dubai Metro to the Palm Jumeirah Monorail. Cost of the monorail is expensive compared to Dubai Metro prices. One-way ticket of the Monorail costs 20 AED (5,44 USD), a roundtrip costs 30 AED (8,17 USD). Children that are smaller than 90cm do not need a ticket to take a ride. Hours of operation of the Monorail are from 9:00 AM to 10:00 PM daily. The entire journey with three stops take about 10 minutes and departs in every 15 minutes with an average number of 3,000 passengers per day. 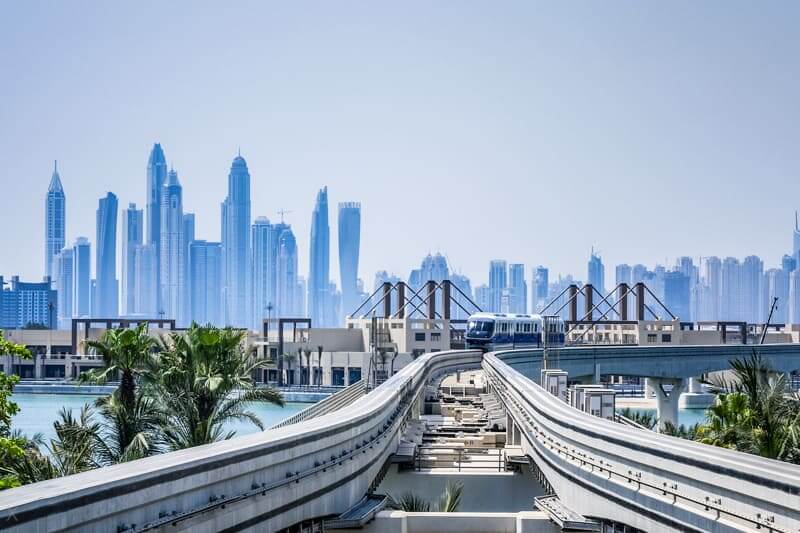 A luxury 5-star hotel located on the island was the first resort built on in Palm Jumeirah and opened in 2008. The theme of the hotel is the myth of Atlantis and is one of Dubai’s most distinguishable landmarks.

The hotel has East and West towers linked with the Royal Bridge Suite. The hotel also has an Aquaventure water park and the Nasimi Beach, which often hosts concerts and other events.

Visitors can swim with dolphins at the Dolphin Bay Atlantis and choose between different kinds of experiences such as swimming or scuba diving with dolphins. All of the experiences also include the same-day access to Aquaventure Waterpark. 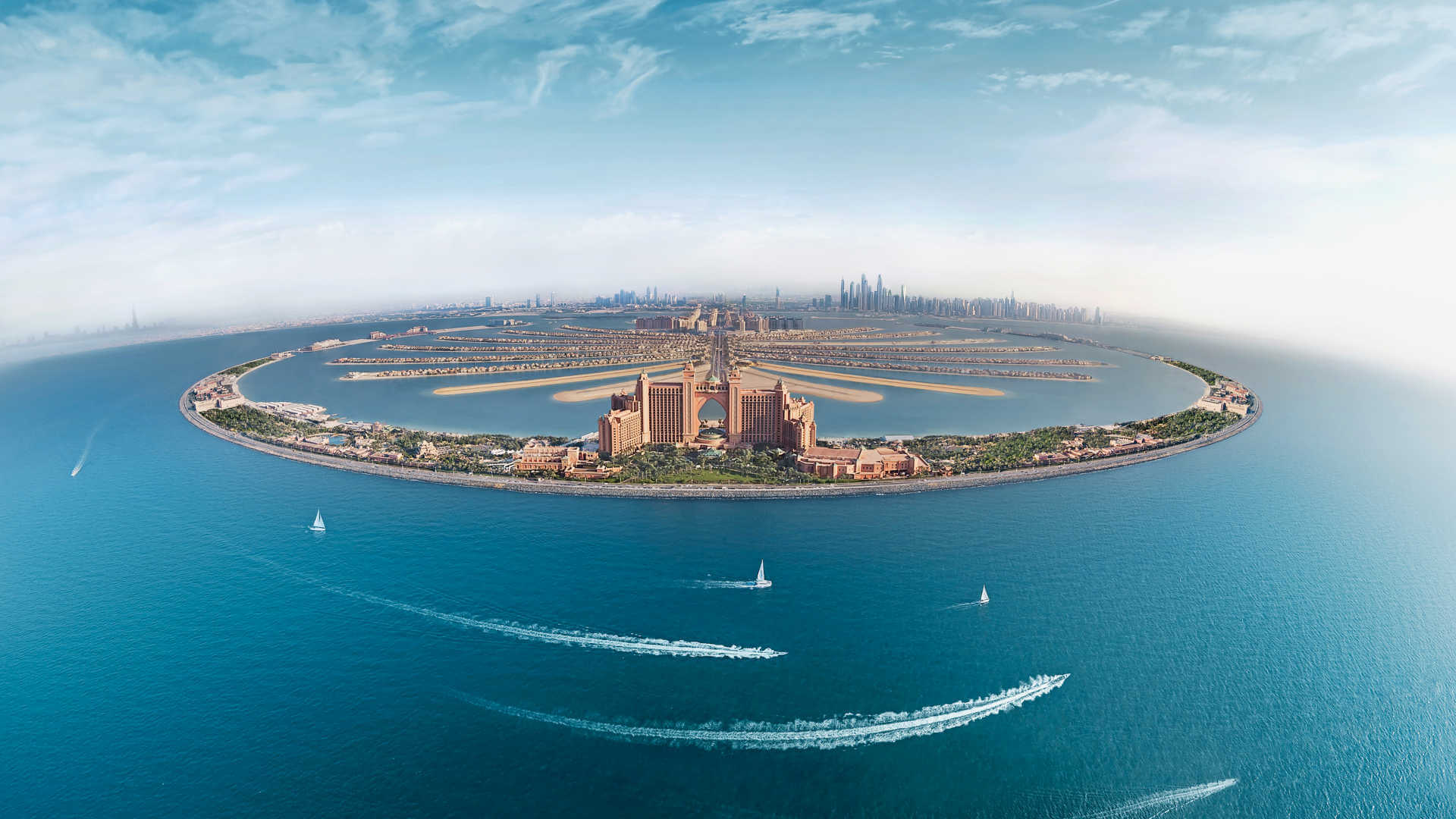